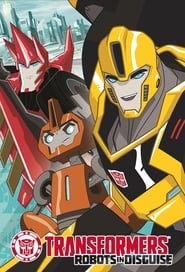 Years after the events of Predacons Rising, Bumblebee is summoned back to Earth to battle several of Cybertron’s most wanted Decepticons that escaped from a crashed prison ship and assembles a team of young Autobots that includes Sideswipe (a rebel “bad boy bot”), Strongarm (an Elite Guard cadet), Grimlock (a bombastic Dinobot), and Fixit (a hyperactive Mini-Con with faulty wiring).

Is Transformers: Robots In Disguise on Netflix?