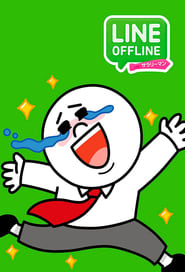 The daily difficulties of Moon, a salaryman that works at the product design department of Line Corporation.

The anime shorts are set in the fictional Line Corporation with a motley crew of idiosyncratic workers. There is the narcissistic section head and president’s son James, the subsection head Moon (who is always gone somewhere but somehow gets his work done), the quiet but kindhearted subsection head Brown, and the subordinate Connie who is in an endless loop of yo-yo diets and weight gains.

Is Line Offline Salaryman on Netflix?